Recent Article from the Marshall Star

NASA has transferred software to the Army, potentially saving the government nearly $4 million.

“NASA has always been at the forefront of good stewardship with the taxpayer’s dollars, and this initiative is no exception,” said Gary Kennedy, NASA representative for the Metrology and Calibration Laboratory at NASA’s Marshall Space Flight Center in Huntsville, Alabama. “Sharing these procedures enhances the Army capability to perform more calibrations in less time, which leads to better customer support for Army operations and tests at a substantial savings for software development costs.” 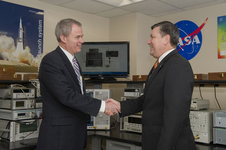 Marshall routinely collaborates with the Army since the center is located on the campus of Redstone Arsenal. Army officials touring the Metrology and Calibration Laboratory, known as the Marshall MCL, became aware of the extensive development of automated software used for calibration and testing. NASA and the Army conduct millions of calibrations to ensure research and operations work safely and properly. Calibrations are only as good as the measurements and data collected, and the software ensures accurate and repeatable data.

NASA is transferring more than 2,400 automated calibration procedures. Originally about 1700 were developed for the Space Shuttle Program with another 300 for general NASA use. Since 2013, 400 were developed for Marshall and are currently being used for NASA programs and projects including the Space Launch System, a new deep exploration rocket managed by Marshall.

This transfer will reduce time the Army would have spent developing its own procedures. Representatives from the Army’s Test, Measurement and Diagnostic Equipment Activity recognized the time and cost benefits of NASA developed software and formally requested access for Army calibration requirements. NASA management approved the request and held a transfer ceremony on Jan. 27 with Marshall Center Director Patrick Scheuermann and James B. Johnson Jr., executive director of the U.S. Army Test, Measurement & Diagnostic Equipment Activity.

Senior metrologist Jeff Cheatham spent 12 years developing the NASA procedures being transferred. The MCL is part of Marshall’s Engineering Directorate’s Test Laboratory and Cheatham supports the lab through a contract with the Marshall Engineering Technicians and Trades Services contract. The MCL assures NASA maintains the most technically advanced measurement concepts and processes. They measure and analyze data in mechanical, electrical, force and flow.

Cheatham emphasized the positive impact from using a standardized set of procedures. “The automated procedures control the instrumentation,” explained Cheatham, who received his training in the Air Force from 1982 to 1987 when he served as a precision measurement equipment laboratory technician. “Human involvement increases the probability of errors, so this minimizes that risk,” he said. “This ensures recorded data has a high level of veracity or stability with minimal variability from technician to technician.”

Cheatham developed approximately 2,000 of the procedures while working at NASA’s Kennedy Space Center, in Cape Canaveral, Florida. Since joining Marshall in 2013, he has added more than 400.

“We currently have a couple of software programmers writing procedures,” said David Hargett, chief of the metrology engineering division at the Army’s Test, Measurement and Diagnostic Equipment Activity. “In a four-month window, they finished maybe 25. So, with access to this NASA capability, our numbers will increase to more than 2,400.”

This transfer is more than just a timesaving initiative. Cheatham’s procedures will improve the overall quality of the Army’s measurements.

“In terms of automation and calibration, we’re a decade ahead of a lot of government agencies,” said Kirk Foster, manager of the MCL. “We have unique facilities and equipment not found at other NASA centers or other government or commercial laboratories, so our technical and scientific capability is substantial.”

Other NASA centers have already benefited from Cheatham’s procedures, as they are available to download through NASA Web portals. The Army will be the first non-NASA recipient. It is anticipated this could spark interest from other Department of Defense branches or other government agencies.

“Right now, we are working on this first transfer, which will contain thousands of individual files,” said Kennedy. “The procedures are quite extensive, especially as the requirements for more advanced measurements used in calibrations become essential to ensuring program and project success.”

NASA’s Metrology and Calibration Program has been at the forefront of repurposing space agency hardware, software and knowledge benefiting NASA projects. With Cheatham’s help, equipment was relocated to various NASA centers, including Marshall — a move saving NASA millions.

More Images from the event: